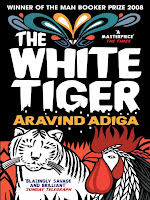 Towards the end of this debut novel, its voluble, digressive, murderous protagonist makes a prediction: "White men will be finished in my lifetime," he tells us. "In 20 years time it will just be us brown and yellow men at the top of the pyramid, and we'll rule the world." He's talking about the phenomenon at the heart of this dazzling narrative: the emergence of that much-heralded economic powerhouse, the "new India".

You have, no doubt, read about it. In fact, you may have done so courtesy of Aravind Adiga, who is Time magazine's Asia correspondent. But with The White Tiger, Adiga sets out to show us a part of this emerging country that we hear about infrequently: its underbelly. We see through the eyes of Balram, who was born into the "darkness" of rural India, but entered the light that is Delhi via a job as driver to Mr Ashok, the son of a rich landlord. Now, though, Balram has escaped servitude and is himself a rich businessman. What's more, his unlikely journey involved a murder.
The result is an Indian novel that explodes the clichés – ornamental prose, the scent of saffron – associated with that phrase. Welcome, instead, to an India where Microsoft call-centre workers tread the same pavement as beggars who burn street rubbish for warmth.
Adiga's whimsical conceit is to give us Balram's story via seven letters to the Chinese prime minister, who, Balram has decided, must be told the truth about India before a forthcoming state visit. So Balram begins: he tells of Delhi's servants, who live in rotting basements below the glass apartment blocks that are home to their employers. He tells of how Ashok's family bribe government ministers, and how national elections are rigged. Ashok, trendy and liberal, is forever expressing guilt over Balram's treatment, but his fine words never come to anything.
It's a thrilling ride through a rising global power; a place where, we learn, the brutality of the modern city is compounded by that of age-old tradition. "In the old days there were one thousand castes and destinies in India," says Balram. "These days there are two castes: Men with Big Bellies, and Men with Small Bellies."
Soon enough, of course, Balram must tell us just how, exactly, he grew a Big Belly himself. Tired of a life of servitude, he takes the violent action that secures his place among Delhi's rich. Adiga's plot is somewhat predictable – the murder that is committed is the one that readers will expect throughout – but The White Tiger suffers little for this fault. Caught up in Balram's world – and his wonderful turn of phrase – the pages turn themselves. Brimming with idiosyncrasy, sarcastic, cunning, and often hilarious, Balram is reminiscent of the endless talkers that populate the novels of the great Czech novelist Bohumil Hrabal. Inventing such a character is no small feat for a first-time novelist.
Arch-defenders of India's claim to be truly democratic, even-handedly prosperous and corruption-free (and these must be few outside of the Indian cabinet) might balk at The White Tiger. Everyone else, surely, will be seduced by it.
Skóre: 10/10
Vystavil Jan Sedláček v 12:46 Žádné komentáře: